COLUMBUS, Ga. – As Auburn Police Officer Webb Sistrunk continues his recovery after being shot in the line of duty, he had a special visitor Wednesday from his K9 partner, Leon.

Officer Sistrunk’s health is improving, and he has been downgraded from ICU to critical care at Piedmont Columbus Regional hospital. 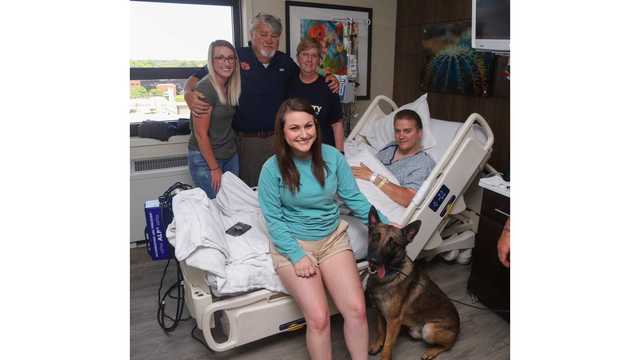 “The Sistrunk family thanks everyone for their continued prayers for our officer and asks that you keep the Buechner and Elliott families in your prayers as well,” said Sistrunk’s family.

Officer Sistrunk was shot in the line of duty on Sunday, May 19, 2019, along with Officer Evan Elliott and Officer William Buechner, who was fatally wounded.

Officer Sistrunk was shot in the right shoulder and sustained a critical injury. He was airlifted and has been in ICU at Piedmont Columbus Hospital and will continue to undergo several medical procedures going forward.

Officer Sistrunk is an eight-year veteran of the Auburn Police Division and is a K-9 Officer. Leon was with Officer Sistrunk during this incident but was not injured. Leon’s third birthday is coming up in July, and his favorite toy is a tennis ball.