A spaniel found dumped by the roadside her dead puppies in a chip shop bag had tears in her eyes, the cyclist who found her said.
The mother refused to leave her puppies when she was found by Paul Skinner, a Boston Borough Councillor who was cycling at Hobhole Bank, near Midville, Lincolnshire, on Sunday.Councillor Skinner told the Lincolnshire Echo: “We spotted on the verge something that looked like a dead bird, but as we passed it moved. 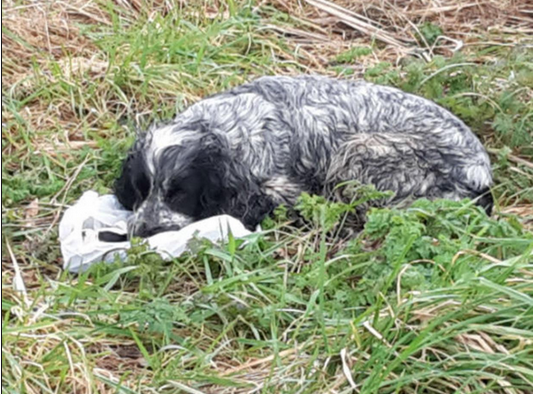 “It was a small spaniel without a collar. We looked around in case anyone was in trouble.

“The dog was on its own, sitting licking the contents of a fish and chips carrier bag. The bag contained four dead pups.

“It was heartbreaking. She had tears in her eyes.”

She had a microchip, allowing her to be returned to the original breeder, who is now looking after her.

It is unclear whether the puppies were dead when they were dumped. Police are now trying to identify the person who dumped the dogs.

PCSO Mick Fern, who is also the kennel manager at Fen Bank Greyhound Sanctuary, told the Lincolnshire Echo: “The vet thinks they were born alive and may have been born that morning, or in the early hours, and they may have been alive when they were left there.

“Sometimes a puppy can give the appearance of being dead, but can be revived if you can warm them up. Their mother was staying with them, come what may. It was a very sad scene.”