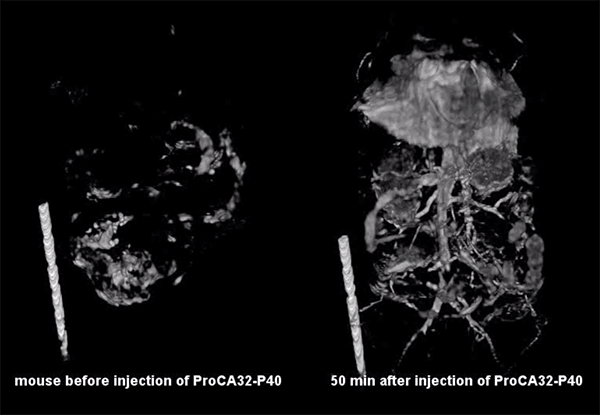 Liver cancer is the sixth most common cancer in the world, with close to 800,000 patients worldwide diagnosed with the disease annually. Current methods of diagnosis include blood tests, ultrasound imaging, CT scans, and MRI scans. MRI offers a highly detailed visualization of the tumor and often helps determine if the tumor is benign or malignant. However, contrast agents used for MRI imaging have significant disadvantages such as low specificity, rapid excretion by the liver, and uncontrolled retention time in the body. This often leads to a late stage diagnosis, drastically reducing the options available to treat the disease. Now, a new protein-based MRI contrast agent has been developed by researchers from Emory University, University of Georgia, and University of Virginia, and their work was recently published in Proceedings of National Academy of Sciences.

The contrast agent, called ProCA32, is reported to be 40 times more sensitive than the currently used and clinically approved agents. This proof-of-concept study also showed that ProCA32 can predict malignant tumors with twice the accuracy compared to current agents, and is also much safer and exhibits reduced metal toxicity. The authors have also demonstrated that ProCA32 can lead to better imaging of other organs, such as the kidneys and blood vessels, in addition to tumors and the liver.
Source