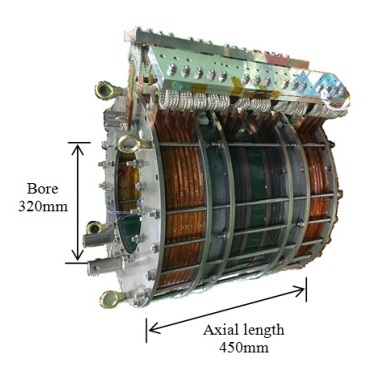 In a partnership with Kyoto University and Tohoku University, Mitsubishi Electric has developed a small model 3T MR with a high-temperature superconducting coil that doesn’t need to be cooled — and therefore requires no helium.

The high-temperature superconducting wires measure .2 millimeters thick and four to five millimeters wide, and are typically wound several hundred times to create a “pancake coil”, which the developers wound precisely to generate a strong and stable magnetic field.

Tiny differences in the thickness and width of the wire can cause the coil’s height to be uneven, which can disrupt the magnetic field and distort the images. To solve that, Mitsubishi used laser displacement meters to carefully measure the coil height and then adjust it with correction sheets.

The researchers found that a winding accuracy of .1 millimeter for pancake coils with an outer diameter of about 400 millimeters could produce the magnetic field homogeneity required for commercial imaging.

Bringing an MR system to market that does not depend on the non-renewable resource might generate a lot of interest. The global helium market suffered a severe shortage from 2011 to 2013, but has bounced back since then and is now into its second year of oversupply. However, research analysts at Technavio believe that the delayed development of natural gas fields and tensions in the Middle East may lead to new supply concerns and price volatility.

The researchers used the helium-free system — which has a bore measuring 320-millimeters and an axial length of 450-millimeters — to successfully image a 25-millimeter mouse fetus. The developers have plans to increase the size of the system by one-half the size of a full-size MR by 2020, and to commercialize it by 2021.