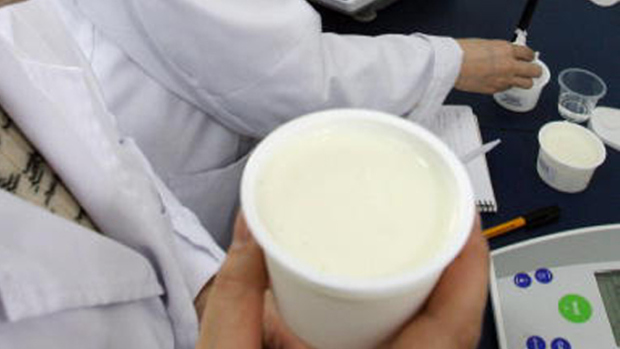 Bay Area natural food enthusiasts may not even be able to handle this recipe.
A med student has come up with a way to make yogurt with her own vaginal secretions.
Cecilia Westbrook, an MD/PhD student at the University of Wisconsin, and her friends wondered why there are so many semen-based recipes and nothing on Google about cooking with vaginal juices.
Westbrook knew the most common bacteria in a healthy vagina is lactobacillus. That is the same bacteria found in yogurt, cheese and dairy products.
Westbrook decided to see if she could make yogurt.
Friend, Janet Jay chronicled her findings in a blog titled, “How to Make Breakfast with Your Vagina” on Motherboard.vice.com.
“She grabbed a spoon, a pan, and a candy thermometer, and set out to create yogurt from her vagina—the ultimate in locally-sourced cuisine,” wrote Jay.
The recipe for traditional homemade yogurt starts with milk and ‘yogurt starter.’ The concoction is allowed to stand overnight and in the morning, you have yogurt.
In what is best described as her ‘scientific experiment,’ Westbrook harvested healthy vaginal fluid using a wooden spoon. In a control group, she used real yogurt as a starter. In a negative control group she just used plain milk as a starter. For the third group, she used vaginal fluid as a starter.
Westbrook left the mixtures to stand overnight.
Fast forward to the next morning. Westbrook did the taste test. She described the vaginal yogurt as “sour, fresh and tingled a bit on the tongue.” She said “it reminded her of Indian yogurt and they ate it with blueberries.”
As healthy as it may sound (or not), Jay’s blog explains that there are real reasons why one should not eat yogurt made with vaginal secretions.
Michigan State scientist Larry Forney told them “When you take vaginal secretions, you’re not just taking the lactobacilli. You’re taking everything.” And it’s possible that, from day to day, or woman to woman, “what you’re using in your yogurt is no longer dominated by lactobacilli but other bacteria, some of which could be pathogenic,” he explained.
“It’s a bad idea in general,” Forney said. “But there is an element of it that has some appeal: she’s using bacteria from her own vagina.”
So…. conclusion: YES you can make yogurt with vaginal secretions, but NO, you shouldn’t eat it.
NOTE: Westbrook’s experiment was in no way associated with the University of Wisconsin.
Source