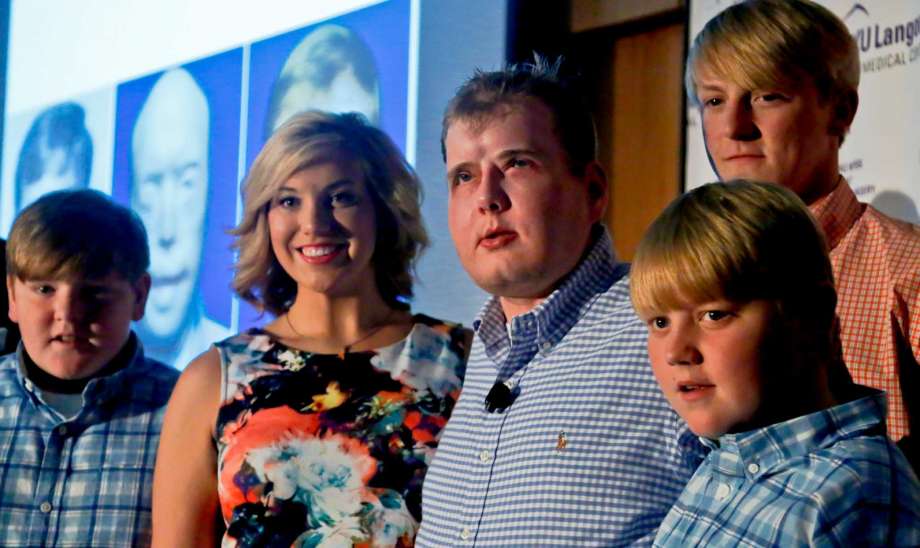 A Mississippi firefighter who received the world’s most extensive face transplant after a burning building collapsed on him said Wednesday that he feels like “a normal guy” for the first time in 15 years.

Patrick Hardison, 42, said he can now eat, see, hear and breathe normally, thanks to last year’s surgery. He has a full head of hair and hits the gym twice a week.

“Before the transplant, every day I had to wake up and get myself motivated to face the world,” Hardison told reporters at NYU Langone Medical Center. “Now I don’t worry about people pointing and staring or kids running away crying. . I’m happy.”

Hardison was a volunteer firefighter in Senatobia, Mississippi, when a building collapsed on him in 2001. He had 71 reconstructive surgeries before the transplant.

While there have been nearly 40 face transplant surgeries since 2005, Hardison’s was the first to include a scalp and functioning eyelids. Doctors have since fixed up some features and removed his breathing and feeding tubes.

Hardison has no scars on his face, and although he resembles his old self, some of his features are different. His eyes are smaller and his face is rounder, but he still has sandy brown hair.

“I don’t get up and look in the mirror and focus on that,” he said. “I get up and just go along with my day.”

The divorced father of five said one of the best moments of his life was seeing his children for the first time after the August 2015 surgery. Four of his children attended the news conference.

His 21-year-old daughter, Alison, said she cried after seeing him because she was so relieved.

“I walked into the room and I was just speechless,” she said. “He gave me a hug and our cheeks touched, and his cheeks were kind of warm, and that was something I hadn’t felt in 14 years.”

She said her father “wasn’t normal on the inside” before the surgery.

“He was very unhappy,” Alison Hardison said. “Now he’s happy with himself and happy with life.”

Patrick Hardison can finally drive and live independently thanks to his new field of vision. Previously, he could see only through “pinholes” because doctors had sewed his eyelids partially shut to protect his eyes, he said.

Eduardo Rodriguez, chairman of Langone’s plastic surgery department, said Hardison has not had any issues with transplant rejection, which is due to his medications, his children and his strength.

The surgery is estimated to cost about $1 million, according to NYU, but the hospital covered the cost. Rodriguez was recently awarded $2.5 million from the Defense Department to continue face transplant research.

Hardison said he hopes to meet this fall with the family of his donor, a 26-year-old artist who died in a bike accident in Brooklyn.

“I’d like to say that I’m the same old Pat, but that would not give enough credit to the amazing journey I have gone through this past year,” Hardison said. “The road to recovery has been long and hard, but if I had to do it again, I’d do it in a heartbeat.”