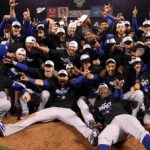 Less than 12 percent of the teams to fall behind 3-1 in a best-of-seven World Series have rallied back to win the title. If the Chicago Cubs want to become just the sixth team ever to pull off the feat, and the first since 1985, they'll have to win the next two games on the road. … END_OF_DOCUMENT_TOKEN_TO_BE_REPLACED